TPO Roofing | The Good, The Bad, The Ugly 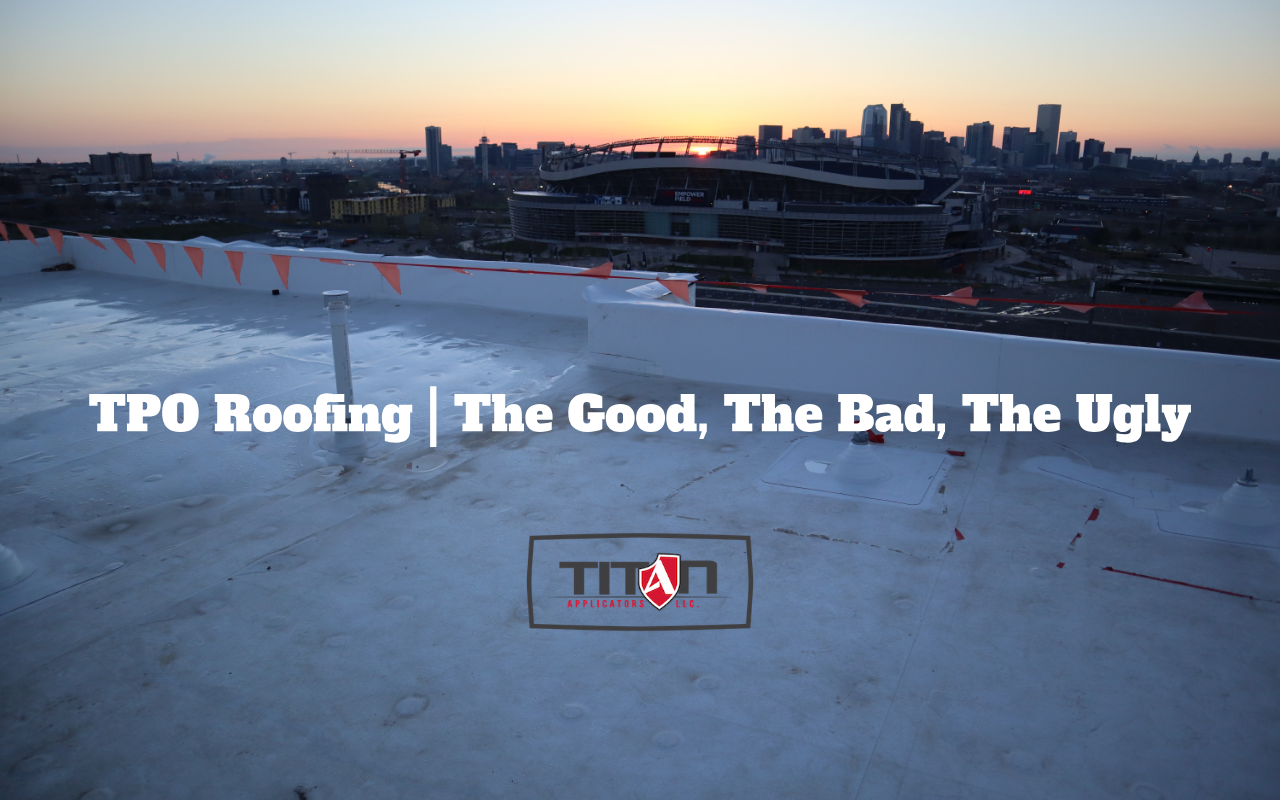 The main purpose of the of this article is to 1) show you the pros and cons of a TPO roofing system and 2) prevent you from making costly mistakes by giving you the bigger picture. With that said, this short article clearly cannot answer every question you might have, but it certainly can get you on your way.

If you are an experienced roofer, property manager, or commercial building owner, you may find this information elementary, but we assure you that even the most advanced readers cannot argue with the basic tenets and facts explained below.

What is a TPO roof?

TPO is a blend of polypropylene and ethylene-propylene rubber that is polymerized together and is part of the single-ply roofing membrane family. It has been manufactured in the U.S. since the early 90’s for use on flat roof structures. The TPO roofing system is made up of an anti-oxidation membrane, (PET)E or glass fiber, a fireproof layer, and a non woven fabric layer.

Many TPO roofing membranes are installed using mechanical fasteners and plates which are placed along the edge of the sheet and secured through the brane and into the roof deck. Once secured, the adjoining sheets of  TPO membrane are then overlapped to cover the fasteners and plates, and joined together with a minimum 1 1/2 inch (40 mm) wide hot-air weld.  The welding process results in a bond that is supposed to be as strong, or stronger, than the sheet itself. The same hot-air welding process will be used to secure the membrane around flashing details like exhaust vents, pipes, and parapet corners. Other methods of TPO installation include fully adhered (glued) systems and glued or taped seams.

It is our experience that building owners and real estate managers who are looking to replace or restore their old TPO roofs will have to balance between a number of factors, such as cost, expected service life, durability, and energy-efficiency when weighing their options. These decisions are complicated in a commercial roofing industry that are currently dominated by two  materials: PVC & TPO, with no solid data to substantiate the reasons why and no real front-runner.

As previously stated, one of the advantages of a TPO roofing system is the cost. It is one of the cheapest flat roofing materials available, costing less than EPDM or other types of rolled rubber roofing.

A TPO membrane roof is considered to be a cool roof and is Energy Star rated. This means that the membrane will reflect the sun’s ultraviolet (UV) ray, which could lead to significantly lower energy consumption of your commercial facility and make it much more comfortable to be in during the summer months.

Other positives include the fact that the building owner has options on how they want it installed. TPO roofs can be attached by adhesives or be mechanically fastened directly to the roof deck. They can also be heat welded in places around chimneys and other penetrants .

Like any new building material to its’ respective market, consumers, installers, and manufacturers learn more about it with time; and that holds true with TPO. One of the biggest disadvantages of TPO roofing systems is that it is a really young technology and the more we learn about it, the less we’re impressed.

Even today, many manufacturers are still trying to figure out the best chemical formula that will make a TPO product durable and long lasting while keeping the stronghold on a competitive price. Unfortunately, that has been a challenge for TPO manufacturers. Many TPO roofing systems have failed much sooner than their anticipated lifespan and some have even been recalled.

Titan Applicators has seen the ramifications first-hand in Colorado: reported problems of seams coming apart and allowing leaks, membrane failures when exposed to excessive heat and ultraviolet (UV) light for extended periods of time, and accelerated weathering when subject to drastic thermal or solar loading swings [cough, cough COLORADO!]. This problem has specifically been addressed by the Midwest Roofing Contractors Association (MRCA). Based on their independent research, an MRCA committee issued a report which recommended to contractors that “[I]f situations exist that may commonly elevate temperatures over 160 degrees and increase solar loads beyond ‘normal’ question the manufacturer as to the suitability of their product for the situation; consider changing the design to forestall the loading.”

The problem is this: tests and studies performed on white TPO allow the manufacturers to publish temperature differences of 50° F. Unless a building owner is washing her or his roof every week, the reality is that TPO roofs (or any roof, for that matter) will attract dirt. With dirt comes discoloration. With discoloration comes loss of reflectivity. With loss of reflectivity… well, you get the point. - The reality of keeping a white roof clean is about the same as keeping setting a box of crayons next to my 2 year old and nicely asking him not to draw on the walls; it just ain’t gonna happen!

The Ugly | The TPO Information Lag

As discussed, one of the major issues with TPO roofs has been premature aging and seam failures due to prolonged exposure to intense heat. These membrane failures were especially common in states that experience high heat and intense UV radiation. In Colorado, we see our fair share of hot days. But what what many people don’t realize, UV intensity is higher in Colorado than most the states. With increasing altitude there is less atmosphere to absorb ultraviolet light. With every .62 miles (1,000 M) in altitude, UV levels increase by approximately 10%. This increased intensity is typically not involved in product testing but plays a serious role in premature membrane roof failures.

These failures have sparked serious concerns from multiple roofing associations, each of which have issued advisories using roofing contractor to be aware of the issues and take precautions.  Since TPO has been documented as one of those roofing products experiencing difficulties, one would expect that associations and manufacturers alike would continue to periodically update roofing contractors about their products. With that said, there have been zero updates since the initial advisories and discussions in 2010 and 2011 (10 years).

It should also be noted that ASTM International (the international standards organization that develops and publishes voluntary consensus technical standards for a wide range of products, systems, and services) has not revised or improved standards for TPO formulations since 2011. (Even though it was noted that further tests and research would be conducted with more updates to follow.)

Finally, the most disappointing piece to the whole puzzle is that TPO roofing manufacturers have not updated their consumers with any new information about TPO performance, simply ignoring the issue. The only company addressing durability and performance of TPO in detail and provides assurance of their product’s quality is Versico (a private label for Carlisle).

Altogether, consumers should ponder what the overall silence means and what has been done to address the problems; or has profit trumped integrity once again?